SoX is a cross-platform (Windows, Linux, MacOS X, etc.) command line utility that can convert various formats of computer audio files in to other formats. It can also apply various effects to these sound files, and, as an added bonus, SoX can play and record audio files on most platforms. 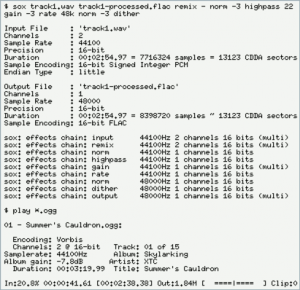 Libao is a cross-platform audio library that allows programs to output audio using a simple API on a wide variety of platforms. It currently supports:

TagLib is a library for reading and editing the meta-data of several popular audio formats. Currently it supports both ID3v1 and ID3v2 for MP3 files, Ogg Vorbis comments and ID3 tags and Vorbis comments in FLAC, MPC, Speex, WavPack TrueAudio, WAV, AIFF, MP4 and ASF files.

Secret Rabbit Code (aka libsamplerate) is a Sample Rate Converter for audio. One example of where such a thing would be useful is converting audio from the CD sample rate of 44.1kHz to the 48kHz sample rate used by DAT players.

SRC is capable of arbitrary and time varying conversions ; from downsampling by a factor of 256 to upsampling by the same factor. Arbitrary in this case means that the ratio of input and output sample rates can be an irrational number. The conversion ratio can also vary with time for speeding up and slowing down effects.

SRC provides a small set of converters to allow quality to be traded off against computation cost. The current best converter provides a signal-to-noise ratio of 145dB with -3dB passband extending from DC to 96% of the theoretical best bandwidth for a given pair of input and output sample rates.

Since the library has few dependencies beyond that provided by the standard C library, it should compile and work on just about any operating system. It is known to work on Linux, MacOSX, Win32 and Solaris. With some relatively minor hacking it should also be relatively easy to port it to embedded systems and digital signal processors.

In addition, the library comes with a comprehensive test suite which can validate the performance of the library on new platforms.

Libsndfile is a C library for reading and writing files containing sampled sound (such as MS Windows WAV and the Apple/SGI AIFF format) through one standard library interface. It is released in source code format under the Gnu Lesser General Public License.

To use libtool, add the new generic library building commands to your Makefile, Makefile.in, or Makefile.am.

Key goals of the Audio File Library are file format transparency and data format transparency. The same calls for opening a file, accessing and manipulating audio metadata (e.g. sample rate, sample format, textual information, MIDI parameters), and reading and writing sample data will work with any supported audio file format. Likewise, the format of the audio data presented to the application need not be tied to the format of the data contained in the file.